LANSING, Mich., May 29, 2019 /PRNewswire/ -- For the eighth time in 14 years, the Michigan Chamber of Commerce has been ranked the top lobbying organization in Lansing by MIRS/EPIC-MRA. 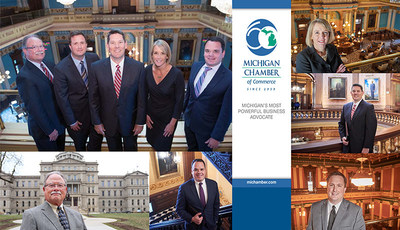 This independent survey of lawmakers, executive branch officials, lobbyists and association executives has consistently ranked the Michigan Chamber as the most influential organization in the State Capitol. The Michigan Chamber has been ranked as the most effective membership lobbying organization in every MIRS/EPIC-MRA survey conducted to date. The survey began in 2005 and is conducted every two years. The April 23-May 11, 2019 survey had 520 respondents.

"Outstanding volunteer leaders, plus an experienced team of Chamber professionals and our unwavering commitment to be member-driven and policy-focused, is critical to delivering powerful advocacy for State Chamber members," said Michigan Chamber President & CEO Rich Studley.

"The aggressive team approach we use at the State Chamber allows us to make a big difference on big issues that impact our members," said Wendy Block, Vice President of Business Advocacy for the Michigan Chamber. "The Michigan Chamber's lobbying team is on the job every day, standing up for job providers and their employees before the administration, legislature and regulatory agencies."

In a report issued by MIRS News, Studley and Block were voted among the most effective association lobbyists, where they tied for second place. Holcomb and Dan Papineau, Director of Tax Policy & Regulatory Affairs, were also ranked as top lobbyists.

The Michigan Chamber is a statewide business organization representing approximately 6,000 employers, trade associations and local chambers of commerce who employ over one million Michigan residents. The Chamber represents businesses of every size and type in all 83 counties of the state. The Michigan Chamber was established in 1959 to be an advocate for Michigan's job providers in the legislative, political and legal process.